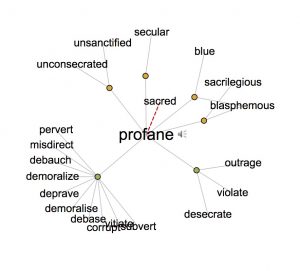 pro·fane – prəˈfān, verb: grossly irreverent toward what is held to be sacred.

Okay, let’s agree … those are two ways to consider coaching, and perfectly valid ones at that. Let’s also agree that it wouldn’t be too hard to find training or mentoring as a coach following one of those two paths either.

For three decades I’ve been developing an approach to working with clients that almost completely disregards the conventional thinking about coaching, and how it’s to be done with clients.

It’s what makes my approach to coaching a bit “profane” so to speak (the other thing is the way I freely and joyfully use “colorful” language that may be more common coming from a stevedore than a coach or consultant – I have family in the stevedore business, so you can believe me, their language is remarkably colorful).

It’s the simplest question in the world and one that ain’t always easy to answer.

It’s also the question you’ll get from any waitress in any NJ diner as she places a cup of strong, hot coffee down in front of you too.

The difference between me and your waitress is that she expects you to know what you want when she asks the question. If you don’t you’ll get an eye roll, and the next thing you’ll hear is, “You want me to give you a little more time honey?” as she walks away not to be seen again for the next thirty minutes (next time you’ll be ready with your order when she puts the coffee down, right?). She’s also more patient and kind than I am too.

I start already knowing that you don’t know what you want … even if you think you do. At least that’s true like 98.725 percent of the time (I just made that number up of course, but it’s probably remarkably accurate).

BUT … I also know that in answering the question, “WHADDA YA WANT?” that you have to access what it is you really want from getting what you think you want (that’s the truly secret sauce in the mix, and why I don’t listen too much to what clients have to say to me when I’m working with them).

Hey, I’m not trying to train you to be a Profane Coach here, I’m just laying out the structure a bit, so if you’re a little confused by that statement it’s okay, maybe someday we’ll meet up and it will make a lot more sense to you then.

What I’m actually paying attention to is how you are when you are answering the question.

How you are is what it’s all about!

What I mean by that is that there’s something we all access when we think about what we want, it’s the way we expect to be when we have it. This way of being is essential as well to what it take to get it, but it’s simply not available in the way of being that’s associated with longing for something that isn’t present.

You can only access what you really want when you aren’t longing to have it and thinking about how it’s missing.

Once again, this is that secret sauce I was mentioning, and to tell you the truth, most people need a little kick in the pants to let go of what holds them back from getting it.

That’s also in part what makes my approach to do the work we’d be aiming at together “profane” in the first place, I take off the kid gloves. We’ll be digging into places that are likely to be uncomfortable, but nonetheless essential to get to so we can get past whatever limits you today from having what you really want.

Let’s just put our cards on the table … what makes more way of working with clients profane is that I’m going to be intentionally provocative about pushing the buttons that normally unsettle the clients I’m working with to get to what’s beneath whatever they find unsettling.

It’s a really fascinating thing to create a context that’s simultaneously both unsettling and safe … another profane idea … that it’s possible to be both intentionally unsettling, provocative and disturbing in a coaching setting, and create a space that’s undeniably safe to explore the themes we’ll be discussing within.

What’s so powerful here is that the “secret sauce” reveals the underlying code that you use to access yourself at your best, when you are beyond being plagued by any limitations that prevent you from achieving what you intend and deeply desire.

This “code” is somatically organized, held in the way you use your body at the micro-muscular level, literally the way your body prepares to respond before it even does.

Many somatic approaches address the idea that they way you use your body profoundly influences how you think, how you respond and what you do. Most of these somatic approaches look at the more gross movements and postural adjustments that we make and how these are affecting us in other ways beyond the question of the movements themslves.

Once you know how the human body works you can figure out what has to happen for whatever you’re experiencing, or observing, at the level of micro-muscular pre-movements to happen. For arguments sake we could be pointing to individual muscle fiber twitches.

There’s another presumption in approaching coaching profanely, that the semantic structure, i.e.: the structure of meaning we create from what we perceive and the sense-making that arises from it, arise from the somatic ground of how we are within ourselves … literally the way we are in our bodies.

This is a profane concept to all those folks who hold the mental processes above or superior to body-based processes. Yet, within the consideration of the profane approach I’m outlining here what arises first in the body is considered at least equal to, and often superior to, what we become aware in mind … and, always ahead of the language we use to describe it.

This is a really big deal …

This way of coaching isn’t for everyone … either coaches or clients, but it may be something you’d want to explore as a coach to add into your snatchel of tricks, or as a client to get past whatever it’s been that you keep bumping up against and ordinary “pedestrian” respectful approaches can’t bypass.