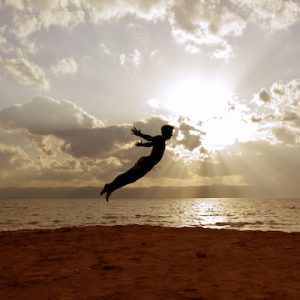 “If you can’t tell if it’s reality you’re dealing with, you can’t possibly expect take action to create the results you want.” – Joseph Riggio, Ph.D. author of “The State of Pefection: Unleashing Your Hidden Code To Mastery”

What’s beyond beyond our subjective, or constructed, experience .. the manifest and extant data in the environment … “objective, empirical evidence” … what we must accept as true even when we don’t agree with it or like it … as we know it to be through our own empirical, sensory perceptual experience.

BUT … this is no ordinary or easy task … i.e.: arriving at an empirical experience of reality that simultaneously allows for what cannot be known except by one’s own subjective, empirical perception and understanding.

AND, I beleive it is what Newton solved in creating “the Calculus.”
Give me a minute or two more and I’ll explain why I believe that … and what it means to you too.

Okay, to begin with we can’t really know if it was actually Issac Newton or Gottfied Leibniz who actually invented modern Calculus (the term was in use long before either of these 17th century genius, but referred to mathematics in general before it was formalized in the approach that we simply refer to as “calculus” today).

And … I don’t really care either …

The reason I want to focus on Newton is because his path to “the Calculus” was more general and applicable, and less theoretcial and sweeping philosophically than Leibniz’s approach.

Leibniz believed that “the Calculus” was a metaphysical explanation of change, i.e.: beyond the material realm, but nonetheless fascinating as a method to explore what was not possible to capture in the physical plane of existence, his was the “Infinitesimal Calculus” the sought to explore infinitesimal events as they were held as concepts of thought.

Newton on the other hand saw Calculus as a general explanation of change, and in specific a way to mathematically understand, capture and describe the motion of objects … especially when dealing with the magnitude of the motion of the objects in question.

Another reason is that I love the way Newton referred to what we know think of as formalization of the Calculus he developed; “Fluxional Calculus” … it just appeals to me.

However, the deep distinction in Newton’s calculus was that he tried to avoid infinitesimals, i.e.: that which could not be grasped empirically, but defaulting to a strictly rigorous epiricism. His was a task of explaining “the indisputable fact of motion” by accepting that as objects moved they were transiting a path that was continuous and not made up of infinitesimally small increments of movement.

This is a distinction between the empiricism of the analog in motion and the imaginal of the digial points that a moving object occupys in some unique, divided and separate instant from all other instants it occupies along the path it transits.

Why Newton HAD To Invent Calculus”

It’s claimed that Newton “HAD” to invent the Calculus to gain acceptance of his theory of gravity with the Royal Academy of Science in England … and there’s some truth to that, but it wasn’t the only reason he began or became obsessed with the path that led to his Fluxional Calculus.

Newton HAD to invent calculus to give him a way to describe the world that had become empirically obvious and undeniable to him … a world filled with motion and change that was constant, continuous, inevitable and unbroken or indissolvable into discreet and distinct separate elements or moments in space or time.

One of the most fascinating things about Newton’s (and Leibniz’s) calculus, that described motion and change, to me was that it demanded the creation of an entire new system of mathematical representation for the elements and concepts that it was addressing and workign with as a “tautology” … a closed, self-contained, way of considering reality as we know it, with it own set of self-referencing, self-organizing principals, rules and language.

So Why Should You Care About Any Of This???

The reason to care about this is simple … because your life depends on it!

Okay … Okay … maybe I’m being a little melodramatic for effect.

BUT, let’s say that the quality of your life, and the experiences you have, do actually depend on it … i.e.: your ability to describe reality beyond yourself, or your solipsistic, singular way of knowing.

To put it another way … YOU NEED TO HAVE MULTIPLE POINTS OF VIEW TO MAKE SENSE OF ANYTHING BEYOND A WILD HALLUCINATION OF WHAT YOU THINK IS “OUT THERE” IN THE WORLD BEYOND YOURSELF … that thing we call “reality.”

However, to make sense of your experience in relation to the world beyond yourself … the experience others are having – of themselves, of you, of the world you are experiencing in simultaneity … or, the events that are occuring that are beyond your ability to contain personally … just about any event that includes more than just you yourself experiencing just you yourself … you must have a way to “triangulate” and navigate your experience in reference to what is beyond just you.

When you can access these multiple points of view, especially a TP-POV … an epistemological phenomenological” point of view … you will be infinitely better at managing your perceptions and actions to direct them to the outcome positions you most want to attain.

This is how you will begin to gather the ability to optimize all your experiences … regardless of the circumstance or situation, on your own and/or with others.

So Why Bring Newton Into This Conversation About Optimal Experience Then???

You Need A SPECIAL LANGUAGE To Describe The Otherwise Indescribable

In my own work, the MythoSelf Process model, I deal with an set of observations about the world that are premised on some special conditions as well …

So, fundamentally to do the work I do I had to create a tautology for the model, i.e.: a self-contained, self-referencing, self-organizing system with it’s own set of principals and rules, as well as it’s own language … in much the same way that Newton and Leibniz had to do to form a way to capture and describe the nature of motion and change that is the Calculus.

In my case, the approach and methology of Soma-Semantics, is the form of describing how we capture and describe the nature of subjective experience and change within it. This is the basis for transformational change – the changing of our experince of reality NOT the change of what we do in response to our experience of realty.

Within the application of the MythoSelf Process model from the transformational shift that becomes possible using the approach and methodology of Soma-Semantics, a second possiblity emerges … that of realizing a significant performance breakthrough, which is only possible to the extent that it is when transformational change has happened first, i.e.: a shift in the fundamental perception of reality.

The essential starting point for achieving transformational performance, where transformational change and performance breakthrough intersect, is the State of Perfection the state experience that is established at the start of the application of the MythoSelf Process work. Without this body-based, felt sense of being in the world what follows would not be possible, with it nothing remains impossible …

Yet, once you have accessed and sustain the State of Perfection all things become possible to you.

Creator of the MythoSelf Process and Soma-Semantics
New Hope, PA

PPS – I will be holding a special one time only 2-hour webcast event, “Accessing & Sustaining The State Of Perfection” on 8 March 2016