It happens to everyone … the kind of trauma that causes a set-back, or downright stops you in your tracks.

The trauma doesn’t have to be big, although it might be, but even a small trauma can:

My trauma knocked me right off the tracks … and at first I didn’t even know it!

In fact my trauma wasn’t a single trauma it was a series of three traumas that came one on the heels of the other in just a few short years … first a huge financial set back (in excess of $1,000,000 USD) … then major disruption and decline in my business to the point where we had virtually no new clients for almost a full two years … and finally, an overwhelming personal tragedy that virtually brought me to my knees.

What’s interesting is that virtually no one knew that these traumas had this affect on me. Looking in from the outside I seemed to just keep going, but the reality was that for a few years “my get up go, just gone and went.”

I knew on the inside that I just wasn’t particularly motivated to take the big steps forward I also knew that I was capable of, but couldn’t get myself to achieve.

This was the worst part … knowing that I was capable of doing so much more and not being able to get to it.

I even knew what to do … but I just wasn’t doing it.

This is how I was caught after one too many traumas to shake off quickly … as I was always used to doing in the past.

I was experiencing “liminality” …

A “limen” is the smallest possible thing you are capable of detecting, or the threshold condition for an effect to begin.

Liminality refers to the “in-between” … when you are no longer in the world as you knew it to be, and you’re not yet beyond it to the next thing either … you remain “in-between.”

After a trauma, we’re almost always experiencing “liminality” and find ourselves stuck in “liminal space” … in a state of transition, not knowing where you are anymore nor where you going … at least not fully, or with any sense of deep comprehension.

When we look closely we might recognize that we experience sensitizing imprints on a regular basis. While we won’t experience everything bad that happens to us as a trauma, some of them are … and those are the ones that create set-backs in our lives that we may find difficult or impossible to get over on our own.

When this happens we’re experiencing “liminality.” … we feel lost, or even trapped, in a maze of our own making.

The Apathy of the “Lotophagi”

We may seem to have amnesia about our part in constructing the labyrinth we’re trapped in, usually because the construction happens in the blink of an eye … literally faster than we can think.

So when we realize stuck in liminal space, we seek the guide that will point the way out, or a map that shows us where we are, where the exits are located, and the paths open to us to get from here to there.

Sometimes we spend so much time in the labyrinth that we begin to become comfortable living within it, and it begins to feel like home to us. This is the mythical danger associated with the sophoric lotophagi, i.e.: the lotus eaters of the Homeric epic the Odyessy.

”I was driven thence by foul winds for a space of 9 days upon the sea, but on the tenth day we reached the land of the Lotus-eaters, who live on a food that comes from a kind of flower. Here we landed to take in fresh water, and our crews got their mid-day meal on the shore near the ships.

When they had eaten and drunk I sent two of my company to see what manner of men the people of the place might be, and they had a third man under them. They started at once, and went about among the Lotus-eaters, who did them no hurt, but gave them to eat of the lotus, which was so delicious that those who ate of it left off caring about home, and did not even want to go back and say what had happened to them, but were for staying and munching lotus with the Lotus-eaters without thinking further of their return; nevertheless, though they wept bitterly I forced them back to the ships and made them fast under the benches.

Then I told the rest to go on board at once, lest any of them should taste of the lotus and leave off wanting to get home, so they took their places and smote the grey sea with their oars.”

The great seduction is to fall asleep, like Odysseus’ men in the land of the lotus eaters, to our own predicament, and to fail to notice that we are in the maze. Then when we arise from our slumber, finding it as hard as Odysseus’ sailors to leave the place where we find ourselves. Yet desperately seeking to find a way back home.

Coming Back to “Home Base”

When I awoke from my own dazed condition, and found myself deep in liminality, I realized I had to shake off the desire to doze again … peaceful in my apathy. I knew I wanted more from life than to coast through, because I had seen some difficult days.

The question was how to revive myself to a fully awake state. I knew that the first few steps would be the most difficult of all … and yet these were also the most essential steps I could … and would … take.

I also knew to that to fully enliven my drive to rediscover myself I had to fight the urge to accept the obvious as evidence of truth … I had to dig beyond that to my core, to reawaken my essential self.

So I set up a regimen that associated a sense of recursive, iterative inquiry to linking intention to action. I think the fundamental ground of performance is linking connection to action.

1) Remembering to link intention to action became my first step out of the maze.

Because I couldn’t discover what I didn’t know and couldn’t see for myself I had to work with what I had access to, my perceptions, my decisions, my behaviors and the results I produced.

2) Noticing the sequence that connected my perceptions to the results I produced, through my decision and behaviors, became my second step.

Then I knew to improve my performance, i.e.: to improve the linkage between my intention and the action I took, would be to record and measure the value of each link in the chain. I had to create a system to measure the value of the steps I took in moving through the sequence of perception, decision-making, behavioral response and results.

3) Establishing and tracking the metrics of my process became the third step beyond the threshold of the liminal space that had trapped me.

Once I could track the movement of my process in real time using the metrics I had established I was able to begin thinking about how to improve the process. Using the data I was tracking and gathering I began altering the things I was doing seeking to identify the things that made a difference.

4) Building a feedback loop using the information I was uncovering, and refining my process by focusing on what worked and eliminating what didn’t, became the forth step to improving my performance.

Now I had the skeleton key to the final step in my perfomance improvement process … the path out of the labyrinth of liminal space … uncovering what I could not see for myself.

While I still couldn’t notice what I couldn’t see for myself, my process left a trail of evidence I could and did begin to track that pointed to the invisible. Although my unconscious limitations remainded beyond my ability to recognize, I could notice for the contexts where I found myself getting limited … this proved to be the key to unlock the gate that freed me.

Instead of trying to figure out what was going on that was unconscious for me, I began noticing where I was limited and what my behavioral responses were in those contexts … then I began changing my behaviors without worrying myself about why I had behaved as I had before.

5) The final step in finding my freedom and fully regaining myself was choosing to do what was not automatic or familiar … I began exploring the idea of becoming comfortable with uncertainty, even the chaotic … and choosing intentional and unfamiliar actions that were most likely to produce my outcomes, even when they were counter-intuitive.

Following these steps I began rebuilding my business and my life. It took a little while but I woke up completely and re-discovered myself again. In fact in many ways my life today is more completely aligned with who I most am more than ever before.

It feels like the first time I can honestly say I’ve truly come home to myself since I was a child. I’ve regained the surety of being myself in a way that is usually associated only with the innocence of youth.

Yet, what may be most interesting to me is that I feel like I’m more aware of the dichotomies of life than ever before … and, in my newfound innocence I find myself simply able to accept them as part and parcel of life and move on. 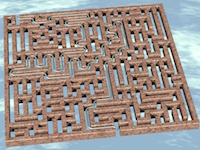 Escaping the Maze … Beyond the Labyrinth

Now I’ve begun refocusing the work I’m doing too. It’s the same process I’m working with, but the focus is on choosing to limit what I’m doing with it and for whom.

I’ve been moving toward working with people and organizations in liminal space for the last few years, and I’ve amped it up even more recently.

Usually this is about going beyond the discovery phase and onto how they relate to others … leaving behind some of the folks who are most familiar to them … and making new connections, or reconnecting, with people who have now become important in their lives in new and exciting ways.

Sometimes the work I do involves groups or teams of people. I love helping people learn how to go beyond competition to collaboration … and to develop the communication tools necessary to begin performing at an elite level.

The most complete expression of the work I’m doing these days, the MythoSelf Process Professional Training, though is actually teaching the process to people who want complete access to it in their lives for themselves and to share with others that are important to them. Those who get hooked even stick around to become skillful enough to become certified MythoSelf facilitators themselves.

I tell you all this to let you know if you’re struggling with liminality yourself there’s a good chance with some persistence you could come out the other side even stronger and more fulfilled than ever.

The hardest part of the journey is always taking the first step as they say … yet, it could be as simple as waiting at the edge of the river for the ferryman, ready with coin in hand to be ferried across the threshold to the other side.

When you get there look me up …

P.S. – I’m running another session of GETTING UNSTUCK, the live webinar series, starting on October 13th. If you’re interested in learning more stay tuned and I’ll get you the details … if you can’t wait drop me a line.

« Freedom is just another word …
Why Aren’t You Following Your Bliss? »