and the universe will open doors

where there were only walls. 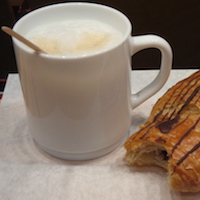 I was a little stunned myself at how much more clarity and focus about what counts in life can be achieved in about the time it takes to have a cappuccino and a croissant.

If you’re … lost … tired … unmotivated … or, yearning for something elusive that you hope will give you the sense of destiny and  fulfillment you desperately desire … but have been unable to find … what I discovered accidentally one morning over breakfast with a friend may just be the answer you’ve been looking for …

But first indulge me in sharing a little bit of background.
Joseph Campbell is remembered by many for his injunction to …

It always amazes me how little people expect of life that really counts for something, and how hard they are willing to work to get it.

Most people think “BLISS” refers to being happy or comfortable, or more than that a kind of ecstasy of spirit.

Yet, I’m confident it has nothing to do with any of those things …

As I understand it, and work with my clients around it, “BLISS” refers to being fully and completely aligned with one’s self … identifying and moving in sync with your true nature.

In Joseph Campbell’s magnum opus, “The Hero With A Thousand Faces” … he lays out the structure of the “Hero’s Journey” and shows us that the hero/heroine must enter the “belly of the beast” first … facing their fears and overcoming many trials before achieving their bliss.

But, while the “Journey” can be wrought with difficulty it doesn’t have to be that way …

Joseph Campbell also points us to other aspects of the “Hero’s Journey” … in this case specifically the “Guide” and the “Magic Helper” … Luke Skywalker’s “Obi Wan Kenobe” and “Hans Solo” in StarWars, or Daniel’s “Mr. Miyagi” and “Ali” from The Karate Kid are examples … but, my favorite guide and magic helper are Carlos Castaneda’s “Don Juan” (Juan Mateus) and “Don Genaro” (Genaro Flores).

The guide and the magic helper are crucial when you are ready to transcend what limits you.

In the past there were many who fulfilled these traditional roles of guiding the seeker over the threshold … the shaman … the medicine man/woman … the witch doctor … the priest/priestess … and on and on.

Today some hope for this kind of facilitation with their psychologist, counselor or therapist … yet the medical models these folks work from is often completely lacking in achieving such transcendence.

However, all is not lost … there are still some models which seek to fulfill these sacred roles … I got this many years ago when I was apprenticing with Roye, my own mentor.

A little over two months ago I began something extraordinary … a *NEW* program for one to one private work I designed, i.e.: the Breakfast Discovery Process … an extremely focused, a single 45 minute coaching session.

Both my client and I agree at the outset that the intention of our time together will be to arrive at an extraordinary clarity about the current situation and the realization of a direction leading forward … a path through the next steps to take.

According to great Swiss psychologist, Carl Jung, there are two tasks of life:

I had a conversation about a month ago with a twenty-something client who was striving to achieve the realization of the first task … to find himself at home in the external world, i.e.: to know what to do with his life.

The conversation began naturally enough, around how he was not sure about what to be doing with his life … the direction he should be taking to build a career and find success in his life. The real issue was one I’ve heard again and again, “I get started on something new with a sense of excitement and hope that this thing will be it … then I quickly get bored and disinterested.”

This comes with incredible possibility … with options and choices, i.e.: boredom common to folks who are ambitious and desire more from life than a guarantee of a place to go from 9-5 everyday and a paycheck at the end of the week.

Transcending the re-occurring boredom that comes with opportunity requires a special kind of vision and perspective to see beyond the obvious. Yet, when that special perspective is achieved what had been hidden with it becomes obvious as well.

This is the foundation for BLISS.

We discussed a lot of things, beginning with an exploration of where he’d been in his life and where he found himself in the moment … all very casual, all very conversational.

At some point he began revealing his deeper thoughts and desires … what really held him back and where he really wanted to be … what it was exactly that he was revealing, all spoken outside of his conscious awareness (… and that’s what made is so unavailable to him).

The key to his movement was actually remarkably simple … a single powerful insight followed by an equally powerful single action were all it took to transform his blindness to clarity.

A critical point is that insight without action is most often meaningless … yet, insight followed by action can be the most powerful transformative process available to you.

Now like most things … any old action won’t cut it.

The action must be precisely aligned with the insight, and the insight must cut through to the core of your hidden identity to create the alignment that leads to BLISS.

My client wanted to know the next steps …

Okay, so you get the idea … a carefully crafted conversation that leads to the insight and action creating the transformation from existential angst to BLISS is what my accidental discovery led me to … and I built an entire process to deliver this kind of clarity to anyone who wants it in about 45 minutes.

I call this process the Breakfast Discovery Process (or BDP in my personal shorthand).

I have a limited number of openings available at the current investment level … and when they are gone the price will more than double.

I’m also including bonuses worth more than three times what the current investment for BDP | Breakfast Discovery Process is today that you’ll get when you register before 1 January 2016.

Get all the details and register here:
The Breakfast Discovery Process

PS – If you are ready to get started here’s the place to register before the program investment more than doubles (from $447 to $975) … and you’ll get my year-end special bonus package when you sign-up before the 1st of January 2016 … including permanent access to TCP | The Complete Package … my premier Personal Development DFY (done for you) program, and Story Control … the complete videos from the three-day program I ran with Jamie Smart … the bonuses alone are worth about three times what I’m charging for the BDP | Breakfast Discovery Process before I raise the price in less than two weeks from now.